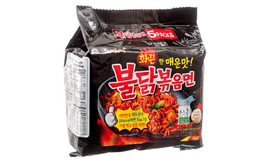 There are many vegans who have been asking about whether or not Samyang Noodles are vegan.

Because veganism is a way of living that seeks to exclude, as far as possible and practicable, all forms of exploitation of, and cruelty to, animals for food, clothing or any other purpose

Are they vegan? Are Samyang Noodles Vegan? The answer is : No. The regular Samyang Noodles are, unfortunately, not vegan, as it contains actual chicken-derived flavouring.

But there’s some Samyang Noodles utilising artificial flavouring rather than animal products and are considered vegan friendly.

Nong Shim Kimchi Ramyun Noodle and Nongshim Soon Veggie Noodle( made with Vegetable broth and can be found here) are vegan.

And as i said earlier, there’s some vegan option of the Samyang Noodles that vegans can enjoy.

There is a list of ingredients on the back of every package that you can use to check if they are vegan-friendly.

The original Samyang Noodles contain chicken-derived flavouring and are not suitable for both vegans and vegetarians.

Do Samyang Noodles Have Pork?

Only 3 variants of the Samyang Noodles receive the halal certification.

These 3 Korean instant noodles do not contain pork or alcohol and are suitable for muslim people.

Always double check the product label before buying these Noodles.