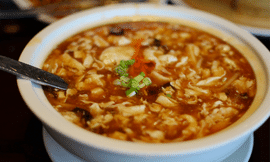 What Is Hot And Sour Soup Made of?

This Chinese hot and sour soup is usually meat-based, and often contains ingredients such as day lily buds, wood ear fungus, bamboo shoots, and tofu, in a broth that is sometimes flavored with pork blood.[1]

Soup preparation may use chicken or pork broth, or may be meat-free.

The taste of this dish does not only depend on the spiciness of the chili or sourness of the vinegar. The other ingredients play a vital role in providing rich and great flavor to this soup.

Is Hot And Sour Soup Vegetarian or Vegan?

But, like many food products, hot and sour soup can be vegan.

The vegan hot and sour soup is made with red and green chillies, ginger, carrots, snow peas, tofu, soy sauce, rice vinegar and a pinch of sugar.

The original Chinese hot and sour soup do not contain wheat and therefore is gluten free.

But some chefs add flour just to make something thicker, even when a recipe most times won’t have it.

So always double check ingredients list before buying the store-bought soup. If you are at a restaurant, ask the chefs before ordering.

Is Hot and Sour Soup Halal?

This Chinese soup is meat-based and may contain chicken or pork broth.

So hot and sour soup can be hahal if it’s made with chicken.

But if pork broth is used in the recipe, the soup will be unsuitablke for muslim people.

If you are at a restaurant, always ask chefs before ordering.