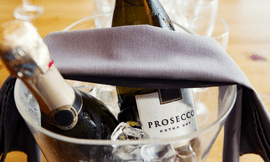 what is prosecco made of? Is Prosecco vegan? Let’s find out. In this post we will cover the Prosecco wine ingredients and see if vegans can drink it.

Prosecco wine is a sparkling wine that hails from Northeastern Italy. It was named after it’s native home, the Italian town of Prosecco, which is a suburb of Trieste.

Unlike Champagne, Prosecco is usually produced using the alternative Charmat–Martinotti method (tank method), in which the secondary fermentation takes place in large stainless steel tanks rather than in each individual bottle, making the wine less expensive to produce, and the minimum production time is 30 days.[1]

Prosecco is made from a blend of grapes that must be at least 85% Prosecco grapes (renamed Glera in 2009 within the European Union). The fermented grapes that is used to make Prosecco are actually brought over to Italy from Slovenia.

You may think that because prosecco is just fermented grapes using natural yeast, it’s suitable for vegans.

But most prosecco producers will use animal products in the fining/ filtration process, and one of the most common is called ‘isinglass’, which is dried fish bladders.

So, is Prosecco vegan? Unfortunately, the italian Prosecco wine is not vegan friendly.

The good news is that there are plenty of vegan options when it comes to prosecco and other wines. The vegan prosecco is the one that hasn’t gone through the fining process at all.