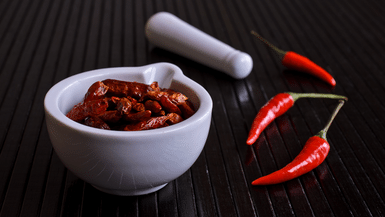 Cayenne pepper or red pepper is a spicy, hot chilli pepper which is placed in the section of the world’s healthiest foods.

However, sometimes we need a substitute to red pepper.

Below you can find a complete list of cayenne pepper substitutes.

Some paprika are spicier than others, made from dried red peppers, paprika is an excellent replacement for cayenne pepper.

However, with a smokier taste, paprika tastes hotter than cayenne, but with more flavour.

Hot paprika is usually the first choice when it comes to a cayenne pepper substitute.

These are usually allowed to ripen fully and then be dried and ground into Paprika powder.

These are one of the best substitutes for red pepper, using firm yet smooth with pointed tips and narrow shoulders is the best to have a sharp taste.

Fresh green chillies add to the crispness and the piquancy.

As a red pepper substitute, these are considered one of the best; these are longer than most however allow a thicker flesh.

These have a long narrow chili and a sweet taste.

Rich in texture, hot and spicy, the jalapeño pepper is clearly the ideal cayenne pepper substitute.

Red peppers are hotter than the average jalapeño and it contains a different flavour.

As long as you’re investing in locally grown jalapeños then it is a great substitute.

Having jalapeño in a jar tastes more flavoured.

Often used to make salsas, this chilli has characteristics of black seeds.

This can be used for preparing salsa due to the rich flavour.

These can come in forms of green, yellow and red and are fairly hot.

They have thick walls therefore they don’t dry well however this is a nice substitute when making dishes such as salsa.

These rocoto chillies are one of a kind, its natural enticing fruity flavour is in the shape of tiny bell peppers, perfect for the substitute for cayenne pepper.

A popular choice in the Caribbean with its spicy, hot flavours, it is as spicy as jalapeno peppers.

These are very much like the Habanero chili however is more rumpled and contains a whole different flavouring altogether.

This is a great cayenne substitute.

As a substitute for red pepper, these peppers have thin walls meaning that they don’t have to be charred, steamed or peeled before use.

These aren’t as hot as the cayenne pepper.

It has a distinct flavour, thick flesh and is generally between 2-3 inches long.

Serranos are used when jalapeños aren’t hot enough, so for a spicier encounter, the Serrano pepper is a great substitute.

These are extremely hot with intensifying fruity flavours; these are typically thin walled and when ripe are red, orange and yellow.

Though they have thin walls, they tend to rot faster and are difficult to dry, when buying them fresh you must keep them wrapped in the refrigerator and use up in 5 days.

This spicy alternative is ideal for the fiery taste tingling experiences.

These are very similar to the jalapeno pepper, however have thinner walls.

These have great flavour and close to hot chillies in Korea.

These red hot flaming chillies are often called “red jalapeños” due to their flavouring.

Overall, the intensity of the chillies and peppers seem enticing.

When lacking fresh cayenne in the house, a cheaper option just shows that it may have more taste, also, you must remember to take into consideration all the factors before buying the cayenne.

Think, do you really want it at this temperature?

Are you ready to kick it up a notch or lower one?

Check the heat ratings before being disappointed with the results as some may taste blend in comparison to the more spicy ones.

This fresh ground chili is a great cayenne pepper replacement, used as dried powder; it is orange in colour and is moderately hot on the spectrum.

These are very rare so you will have to shop a bit, however the taste is exactly the right spice level to tingle your taste buds.

As a cayenne pepper substitute, this is one of the lowest heat powders available, rich in flavour rather than spice, this is more for someone who enjoys flavour.

This is sweeter and tastier than cayenne; it still has excellent flavours and is suitable for any type of cooking.

This is made in two different countries and both have different flavours.

The American one is a seasoning and blend, mixed alongside other spices to bring it to its taste.

The Mexican is plain ground California chili and no other additives, both are fabulous substitutes of Cayenne.

This substitute for cayenne pepper is much less sweet than the others, it is particularly used in Indian cooking, and especially meat dishes and is a great alternative to add flavour and juices to the cooked meat.

As a cayenne replacement, paprika is sweet and full of flavour in a brilliant red colour, it is soft and the texture is overwhelming on the tongue.

This substitute for red pepper spices up recipes with white sauces, with its fine powder and with the same amount of heat as Reshampatti, this is a hot powder.

However, it lacks the flavour of red chili peppers; other than this, the white chili powder is rich in texture and spice.

This chili powder is a little less sweet and yet a bit hotter than Kashmir however not as hot as Cayenne, this is intensified with spice rather than flavour for those who love the heat on the tongue.

However, you have to ensure that the chili powder doesn’t come with other spices added onto it as these can change the flavours of the dish at a considerable rate.

We would recommend the spices for the food and the whole fresh chillies for mixes such as chutney, salsa and salads.

These chillies are excruciatingly hot, leaving you pleased with that tingling of the taste buds.

However, if you have no problem with cayenne, you can try a detox diet but only after you read all about cayenne side effects.