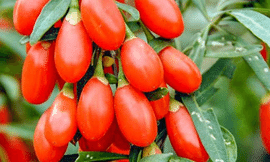 It is commonly used by the name of goji berry.

The fruit whose Latin name is Lycium barbarum is also known as Chinese wolfberry.

The Indians usually call it Murali.

The color of wolfberry is bright orange to red.

It contains 10 to 60 yellow seeds inside.

Wolfberry is cultivated in south China and exported to several parts of the world.

The majority of wolfberry productions are from Ningxia and Xinjiang, China.

Wolfberry of Ningxia is believed to have the best quality.

The Asians thus consider it as ‘the red diamond’

Wolfberry has gained its popularity since people perceive its nutrient value and active antioxidant substance.

Wolfberry is a good source of dietary fiber.

It is also estimated that 100 grams of wolfberry contains 370 calories.

This fruit is rich of micronutrients and phytochemicals.

There are 11 essential minerals, 18 amino acids, 6 necessary vitamins, lycopene, beta-carotene, antioxidant agents like phenols, and many others.

As a good source of minerals, each 100 grams serving of wolfberry supplies calcium, potassium, iron, selenium, zinc, and riboflavin which are good for our bodies.

It is also rich of polysaccharides.

The berberine content in Barberries can help managing type 2 diabetes.

Due to their high concentration of berberine, Barbary Wolfberry helps slow the transit of feces through your gut by inhibiting certain receptors, thus preventing diarrhea.

The possible underlying mechanisms of antidiarrheal effects of Berberine may be due in partially to the reduction of the number of goblet cells and the amount of mucous secretion through re-balancing gastrointestinal peptides.[2]

3-It have anticancer effects.

4-It is good for your dents health.

Many herbaceous plants contain compounds that have biological effects in addition to their medicinal properties.

One of these plants, with the scientific name of Berberis vulgaris, is barberry.

The barberry dental gel has been shown to effectively control gingivitis and microbial plaque formation in children.[4]

Wolfberry is widely marketed for some purposes.

The Chinese adds wolfberry in the cuisine.

It is usually served in riceand jelly.

We can also find wolfberry in a soup together with wild yam and vegetable.

Herbal tea also uses wolfberry in one of the ingredients.

As a drink, wolfberry can be made as juice, wine, or coffee.

Wolfberry is widely produced for medical reason as well.

The study shows that consuming wolfberry brings many benefits for our health.

Considering the abundant nutrients in wolfberry, it is necessary to put it in our diets.

Antioxidant and phenol in wolfberry work together to prevent cancer.

Nowadays, it is also used as cosmetic for anti-aging products.

The chemical substance in wolfberry is believed to lower blood pressure.

If you have low blood pressure, consuming wolfberry may cause dizziness or fainting.

Wolfberry also contains large amount of pesticide and herbicide which harm our health.

In some cases, wolfberry can bring fatal disease.

Since wolfberry contains high polysaccharides, it may cause high blood sugar level.

It is good to add wolfberry in our diets.

It supplies almost all of our nutritions needs.

However, we need to pay attention to the side effects of consuming it.

If you have diabetes or low blood pressure, it would be better to consult your doctor before.