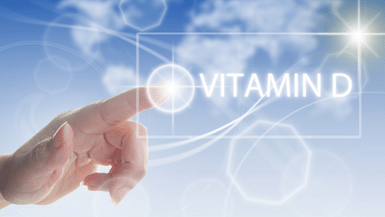 Sufficient and optimal intake of vitamin D is a heated and somewhat controversial topic.

Back in 2009, the Recommended Daily Allowance (RDA) for vitamin D was 200-400 International Units (UI) per day, which was found to be sufficient to suppress bone-related diseases such as rickets and early-onset osteoporosis.

Although this level of intake was adequate for combating major disorders, many researchers posited that it was far less than optimal.

Much in the same way eating 500 calories a day will prevent death from starvation but little more than that, many researchers believed that 200-400 UI of vitamin D was far below optimal intake.

Dr. Holick of the University of Boston Medical Center, for example, suggested that we may need as much as 10 times the RDA for optimal function.[1]

It is believed that common vitamin D deficiency related issues, such as loss of bone density, fatigue and depression, can be remedied with higher levels of intake.

Currently, the RDA for vitamin D is 600 IU for men and women between the ages of 14 and 70, slightly lower for children below the age of 14 and higher for those over 70.

Many researchers, however, believe that optimal levels of intake are between 2,000 and 4,000 IU.

According to Dr. Cate Shanahan, this discrepancy is due to the government’s refusal to acknowledge relevant studies on individual cells, groups of cells and animals.[2]

How Much Vitamin D is Safe, and How Much is Too Much?

While 2,000-4,000 IU is a good guideline for vitamin D supplementation, it’s likely that significantly more is safe.

Supplementation above 10,000 IU a day is not recommended.

READ : What Does Vitamin A Do?

Sun, Food and Supplements: How to Get your Vitamins D

One of the the primary reasons that vitamin D deficiency is such hot topic and so widespread is that it is one of the few vitamins that is nearly impossible to get from food alone.

The majority of our vitamin D intake comes from sun exposure and, in general, a much smaller portion comes from food sources.

Supplementation is recommended if your diet and sun exposure are sub-optimal.

Getting sufficient vitamin D from sun exposure is actually quite simple (but not easy for some people) but runs contrary to conventional wisdom about sun exposure.

Because many sunscreens block vitamin D absorption, it is important to get plenty of sun exposure without wearing sunscreen.

The key is to get just enough that you’ll eventually get a slight tan, but not burn.

The primary catalyst of skin cancers and other skin disorders is sunburn, not sun exposure.

Don’t be afraid to get some mid-day sun, but don’t let yourself burn.

In general, people with darker skin pigments will need more sun exposure get sufficient vitamin D, but will take longer to burn as well.

As far as food sources, dairy, eggs and fish are good choices. Organ meats such as liver are particularly rich in vitamin D, but can be difficult to implement as a dietary staple.

Be wary of fortified foods with vitamin D2, as D2 is a synthetic form of vitamin D not naturally used by humans.

While it’s almost always best to get as much of your essential vitamins and minerals from natural sources, the case of vitamin D is one of the few instances where supplementation is often a good idea.

Not only are most people not getting the level of sun exposure they need, but most people aren’t getting nearly enough vitamin D from their diets either.

This is partially because of the prevalence of poor dietary choices and processed foods, but also because of how traditional foods have changed over the past 50 years or so.

Many fish are now farmed, and almost all land animals we eat are raised in factory farms.

Keep in mind that plants do not produce vitamin D, so these lower-quality animal products are our only dietary source.

Regardless of the cause for any given individual, the fact remains that approximately 50 percent of Americans are deficient in vitamin D, which contributes to an enormous array of health problems.

If you aren’t getting regularly sunlight and frequently eating fresh animal products, it’s likely you fall into that 50 percent.

Ideally we’d all get tested for vitamin D deficiency, but that isn’t an option for everyone.

How to Pick a Supplement

If you do supplement, start with 2,000-4,000 IU as recommended by many respected researchers.

Avoid cheap supplements with vitamin D2 rather than D3, as D2 can’t be utilized by the human body nearly as well.

Consider high-quality natural products that contain vitamin D, such as cod liver oil, or pick a regular vitamin D supplement from a brand your trust.

If you have the resources to get tested, do so again after supplementing for 30 days and adjust your intake accordingly.