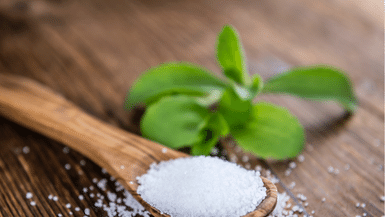 Some of you may be asking “wait a minute what is Stevia anyway?”.

Due to it’s sweetness and it’s health benefits for diabetics, Stevia is used world wide as an alternative to sugar and other more harmful sugar alternatives.

Generally speaking Stevia is considered to be the safest sugar alternative by the scientific community, but like everything else it does have some hypothetical side effects if used for long periods of time in high doses.

Taking heavy daily doses of Stevia over long periods of time has been shown to potentially inhibit carbohydrate absorption in lab animals.

This side effect could possibly affect the metabolism by limiting the conversion of carbs into energy.

This has not been reported in humans, but may be possible if Stevia is overused.

When compared to the negative side effects and warnings of sugar if used heavily everyday, it appears to be a minor setback, if that.

READ : What are the Most Common Sugar Substitutes?

The steviol glycosides that give Stevia it’s sweet taste can be converted in a lab into a mutagenic compound , which could possibly cause a genetic mutation of cell DNA, that could aid the growth of cancerous cells.

While that side effect sounds serious, it should be noted that this conversion does not happen naturally.

The process of steviol being converted into a carcinogenic mutagenic compound naturally in a human cell has never been observed nor reported. So this warning is also a theory.

In Europe scientists have fed large doses of Stevia to rats everyday for nearly 2 years, in order to test it’s side effects.

The only substantial side effect discovered, was a side effect to the male reproductive system of the rats.

The sperm count in the male rats was notably decreased and the weight of the seminal vesicles had also decreased.

A similar effect has been observed in female hamsters.

After being fed high doses of steviol over long periods of time, the litters of the female hamster yielded fewer babies.

It should once again be noted that this has never been observed in humans.

If one were looking for a healthy alternative to sugar then Stevia would most definitely be considered the best choice.

There are lots of artificial sweeteners but none more natural and more safe then Stevia.

In this article I have given all the known possible side effects and warnings of Stevia, and as you can see there are really only three, that are hypothetical and relate only to high doses.

I believe as time goes on Stevia will be just as popular as sugar within the next one hundred years.

It already makes up 40% of the market in Japan, and is commonly used in south America.

It is only a matter of time before the rest of the world follows suit.