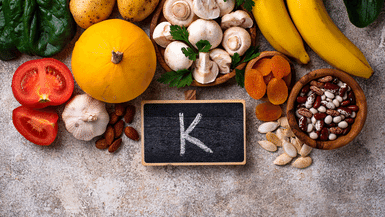 Vitamin K is a fat soluble vitamin that influences a wide variety of bodily functions.

It is most directly involved in blood coagulation (forming blood clots) but also contributes to bone and skin health, counteracts poisoning from anti-coagulants (blood clot inhibitors), and may reduce risk for liver and prostate cancers.

What Are the Types of Vitamin K?

Vitamin K2 has many sub-types, such as menaquinon-4 and menaquinone-7, which can be obtained from food or produced from vitamin K1 through various processes in the body.

Menaquinon-4, for example, is synthesized from vitamin K1 in by the body, whereas menaquinon-7 is created by gut bacteria.

There are a total of nine forms of vitamin K2.

In addition to vitamin K1 and the various forms of K2, there are also the lesser-known forms, K3, K4, and K5 which are man-made versions present only synthetic supplements.

These synthetic versions are useful for some medical treatments, but are generally considered unnecessary and potentially unsafe for regular consumption.

READ : How Much Vitamin D Should I Take?

What Does Vitamin K Do? Uses and Health Benefits of Vitamin K1 and K2

As mentioned, vitamin K is most directly responsible for its role in promoting proper coagulation in the body, particularly in relation to healing cuts, bruises and other sources of skin irritation.

For this reason, vitamin K creams are often used for treating bruises, cuts, some rashes and even dark circles under the eyes.

Another important aspect of vitamin K is it’s effect on bone health.

Observational studies such as the Nurses Health Study and the Framingham study suggested that higher vitamin K1 consumption may be associated with lower rates of hip fractures, but were unable to imply causation because so many other factors were changed.

However, it has been shown that menaquinon-4 (a form of vitamin K2) does in fact prevent bone deterioration and may be useful in fighting against degenerative diseases such as osteoporosis.

What Foods are High in Vitamin K?

Vitamin K1 is most commonly found in leafy green vegetables such as spinach, kale and chard.

High levels of vitamin K also occur in some fruits, such as avocados and kiwis, although virtually all fruits contain some amount of vitamin K1.

Some vegetable oil products such as soybean oil contain trace amounts, but the level of consumption necessary to obtain sufficient amounts of the vitamin is too high for these oils to be considered a good dietary source.

Vitamin K2, on the other hand, occurs in animal products such as meat, poultry, eggs and milk.

How Much Vitamin K do I Need? Recommended Daily Allowance

The recommended daily allowance for vitamin K1 is 90-120 µg per day, which can generally be reached relatively easily with a diet sufficient in fruits and vegetables.

Vitamin K2 is yet to receive a specific RDA, but deficiency is unlikely with regular intake of quality animal products.

As with many vitamins and supplements, most people only need to supplement vitamin K if their diets are notably lacking.

On exception, however, is in the case of people taking certain medications that may alter vitamin K absorption and the conversion of vitamin K1 into vitamin K2.

This is especially relevant to people taking digestive medications or antibiotics, as these are most likely to interfere with vitamin K levels.

READ : Sex and the vegan diet

Should I Worry About Vitamin K or Not?

Although more research is still needed, it’s clear that vitamin K is an essential component of health.

However, supplementation is only necessary for people eating nutrient-poor diets lacking in vegetables and animal products.

Much like vitamin D, vitamin K plays a significant role in various aspects of health and is sometimes toted as a miracle nutrient as a result, but it is still only a one component of overall health and should be treated as such.

Get your fresh vegetables and animal products, consult your physician about any medications you’re taking, and stay posted for further research on vitamin K.