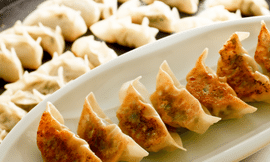 Dumplings have become extremely popular across the world from China, Russia, and other Eastern European cultures.

More and more people are experimenting with new and exciting flavors, combining them together to create entirely unique dumplings that are innovative in taste and texture.

So what exactly is a dumpling and what are they made of? Are dumplings vegan?

What Exactly is a Dumpling?

Dumpling is a recipe of dishes that consist of pieces of dough wrapped around a filling, or of dough with no filling.

Many recipes call for herbs, onions, grated cheese, or chopped meat to be rolled into the dough before cooking.

Dumplings may be prepared using a variety of methods, including baking, boiling, frying, simmering or steaming.[1]

It can be served in soups or stews or with fruit.

What Are Dumpling Made Of?

Dumplings are made of 4 main ingredients: flour, water, salt and the filling of your choice.

The dough can be based on bread, flour, buckwheat or potatoes, and may be filled with meat, fish, tofu, cheese, vegetables, fruits or sweets.

Can Vegans eat dumplings? Are Dumplings Vegan? Dumplings can be both vegan and vegetarian (especially if we are talking about the dough alone). Some dough is made with eggs and/or dairy, which are not vegan.

Also the dough can be filled with meat, vegetables, or cheese.

Although the dough is often made vegan, with only flour, water and sometimes potato, it can also include curd or eggs.

So always double check before buying them from the store.

South Africa has some kind of dumpling known as melkkos.

These boiled dumplings are made by mixing flour, fat, and baking powder with milk or water to form a dough.

In most cases, yes – vegetarian dumplings are generally vegan.

If you want to buy them from a store or eat them at a restaurant always double-check.

The best solution is to make them at home because you know exactly what’s in them!

Typically gyoza is made from a thinly rolled dough filled with ground meat and vegetables, which can then be boiled, steamed or fried.

Is Gyoza vegan? Gyoza dumpling can be vegan . The Gyoza dumpling that is made with light tofu, fragrant leek and onion, wrapped in a thin and chewy dumplings wrap are vegan.

Other Gyoza dumpling recipes contain animal derived product such as meat and therefore they are not suitable for vegan.