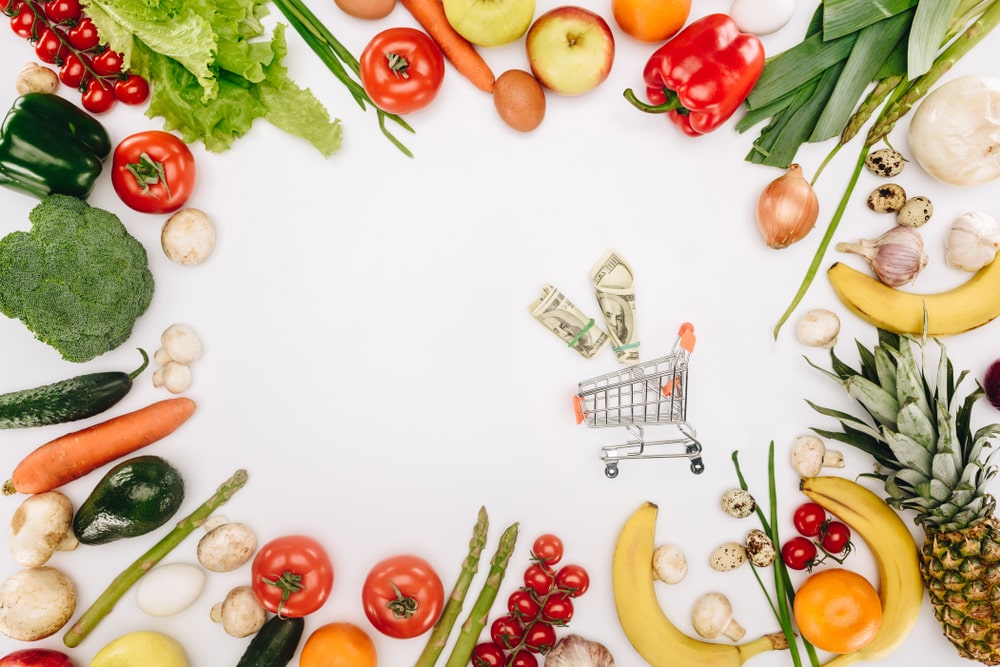 When you want to eat a vegan diet, you may think it’s not possible due to your budget. You can go vegan on a budget without having to eat unhealthy food.

The key is to balance the amount you spend, along with what you eat. It’s possible to go vegan and eat horrible foods.

It’s possible to go vegan and eat the cheapest foods in the grocery store.

Just because something is made without animal products doesn’t mean it’s healthy for you. Many unhealthy items (Oreos) are vegan.

Heck, one of the unhealthy options for vegans at Taco Bell are the cinnamon twists.

You can go vegan on a budget and still eat healthy foods. In fact, the healthy foods may even be cheaper, depending on where you get them.

Here are a few of my best tips to help you go vegan on a budget.

I was reading an article (well skimming) yesterday and the author said they couldn’t afford to shop at farmers’ markets.

This caught me off guard. In my experience, farmers’ markets are far less expensive than grocery stores.

If you want to go vegan on a budget, shop at farmers’ markets.

I remember when my wife and I were in Wisconsin last summer.

We hit up a local farmers’ market in the last hour they were open and the guy selling greens hooked us up every single time.

His prices were already good as I could get a huge bunch of kale for $3 (would have cost about $10 for the same amount at a grocery store).

We paid $9 for 3 bunches and he ended up giving us 6. It lasted us nearly 2 weeks and that was just our greens.

Plenty of other items we have bought at farmers’ markets were not only cheaper, but also better quality than a grocery store.

The same farmers’ market had tomatoes, which were in season, and when I compared them to the organic option at the local grocery store, the farmers’ market ones were not only cheaper, but better in flavor and color.

Often, you can score great deals on fresh produce at farmers’ markets.

Plus, you’ll likely be buying what’s in season, which always makes for a better price.

READ : 8 Easy Ways To Eat Healthy On The Cheap!

Have you ever noticed how certain produce items are on sale at the same time every year?

This means, they are likely in season and it’s a good time to buy them.

For example, if you buy a watermelon in the summer, it might cost you $4.

Buy the same watermelon in the winter and expect to pay twice, maybe three times as much, if you can even find one.

Shopping for in season produce will not only help you go vegan on a budget, but it will also help you eat what you should be eating.

We are designed to eat what’s in season for the climate we are in, not anything we want just because we have access to it.

Beans and Rice are Vegan

You can simply go vegan on the tightest budget possible by eating beans and rice.

Now, you do have to be careful as rice isn’t safe unless you buy organic, non-gmo and you wash it before cooking it.

Beans can be bought dry or canned for very low prices and they can be spiced up very easily.

Heck, all you have to do is add in a little jalapeno (super cheap), some onion and some greens to make it a pretty complete meal.

I prefer canned beans because dry beans are a pain to cook and they are time consuming.

For about $15, you could easily have dinner for 4 to 7 days, depending on what you add to it and how much you eat.

The best part about beans and rice, other than how budget-friendly they are, they act as a blank canvas.

You can add chili powder, cumin and paprika to make them a bit like Mexican beans and rice or you can add herbs to make a completely different meal.

Plus, you can choose from a number of types of beans and even add canned diced tomatoes for extra flavor.

If you’re not a big fan of rice, you can spend a little more and substitute quinoa.

It cooks a little faster and offers a higher protein option.

Oatmeal is the Breakfast King

Oats have about 5 grams of protein per serving and you can buy the organic option for super cheap.

For about $5, you could easily add oatmeal to a weeks’ worth of breakfasts.

Season with a little cinnamon, vanilla and add a cut up apple or another fruit you like for a decent breakfast.

Make Your Own Sprouts

Sprouts are a very healthy option to add to just about any meal and you can make them yourself.

Lentils are great for making sprouts and they will be super fresh, super cheap and packed with vitamins, minerals and enzymes.

A bag of good lentils will cost less than $7 and you can probably make sprouts 10 to 15 times with one bag.

They will likely last you an entire month or longer.

Check out this video to learn how to make sprouts at home.

Get a B12 Supplement

About the only thing a vegan cannot get from whole foods is vitamin B12.

It’s very difficult for anybody to get from food, but there are supplements you can get.

For about $11, you can get a supplement of B12 that will likely last you many months.

Make sure you read the label because many of them will tell you that one pill will give you 1,000% of your daily need or far more than 100%.

If that’s the case, cut that baby up and take a half a day or even less. You don’t even need to take it daily.

My supplement gives me 300% of my daily need so I cut it in half and take it about twice a week.

That’s all I really need and nobody needs 300% of the daily recommended value for B12.

This will help to stretch it, too, as throwing an $11 item into your grocery budget often will hurt when you’re trying to go vegan on a budget.

Buy Oils in Bulk and Use Sparingly

Good oils are very good for your body. As a vegan, you will likely be using olive oil and coconut oil often.

Buy these in bulk, even though it’s going to hurt a bit, at first.

You don’t have to go with the most expensive organic version, but get these in organic form.

I have picked up a huge container of Mediterranean Extra Virgin Olive Oil (LINK) for less than $19 and stretched it for nearly 3 months of use before.

You can stretch these oils by using them sparingly and adding a little water to your pan.

This won’t work for cooking meat or eggs, but you’re a vegan, so no worries. It works great for cooking vegetables and beans.

With canned beans, you can add water to the can after emptying it and use that water for cooking.

The little bit of bean juice will add a little flavor to your dish. This also works for canned tomatoes and other canned items.

Buy Clearance and Stock Up

Most grocery stores will clearance items later at night and they may have a clearance section. This isn’t just for packaged items, either.

My wife and I have scored great deals on greens because we shopped later at night.

Sometimes, you get a manager’s special and get the entire package for half off or even more.

This also goes for ugly product. Sometimes, you can get ugly product for super cheap just because it doesn’t look perfect.

My final tip has to do with adding noodles to your grocery list.

You can pick up non-gmo, organic, whole wheat or veggie noodles for less than $2.50 a box.

They can be added to so many meals just by tossing them with some cooked veggies.

Of course, you can grab the pasta sauce, too, but it’s often a bit expensive for what you get. Instead, make your own as it will be far cheaper.

There are so many dishes you can make when you want to go vegan on a budget.

The Vegan Cooking for Beginners and the Wildly Affordable Organic books are great to help out.

Wildly Affordable Organic isn’t a vegan book, but it is a budget book, so just make sure you replace or get rid of any meat or dairy in the recipes.

Have you found any cool tricks that help you eat vegan on a budget? Share them in the comments below.

READ : The Benefits of Cooking with Friends