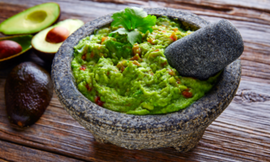 What is guacamole made of? Can vegans eat guacamole? Let’s find out.

The word “guacamole” and the dip, are both originally from Mexico. The name is derived from two Aztec Nahuatl words—ahuacatl (avocado) and molli (sauce).

Guacamole is made from avocados and spice. Beyond the avocado base, the usual ingredients in guacamole are salt, lime juice, onions, jalapeños, tomatoes, garlic, and cilantro.

It can be served as a dip or spooned on top of tacos for an easy dinner upgrade.

Is it vegan? Is Guacamole Vegan? Yes. Traditional Guacamale is considered vegan friendly as it only contains plant based products.

So Chipotle Guacamole is completely vegan.

Chipotle’s Guacamole is best used as a healthier substitute for their sour cream and/or cheese.

They do not include sour cream in the ingredients.

So Subway Guacamole is considered vegan.

So it is considered Vegan and kosher.

Here’s a list of Guacamole brands that offer Vegan Guacamole:

But as rule of dump, always double-check product label before buying.

Guac doesn’t have to be extra, for a best choice you can make your own homemade guacamole.

Here’s how to make the best Guacamole.click here