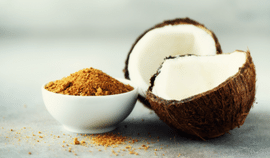 What Is Coconut Sugar?

Also called coconut palm sugar, Coconut sugar is a natural sugar made from coconut palm sap, which is the sugary circulating fluid of the coconut plant.

Coconut sugar has no significant nutritional or health benefits over other sweeteners.

It comes in crystal or granule form, block or liquid. Farmers tap coconut palm sap by cutting into the tree’s flower-bud stem to access its nectar.

Then the sap is mixed with water, boil into a syrup, and let to dry and crystallize.

Why is coconut sugar vegan?

Coconut sugar is made from 100% plant based product and is considered vegan.

Veganism by definition is a way of living that seeks to exclude all forms of exploitation of, and cruelty to, animals for food, clothing or any other purpose.

The production of Coconut sugar respect all vegan standards.

How To Make Coconut Sugar?

Coconut sugar comes from coconut trees that grow in tropic and sub-tropic areas.

The final product is brown and granulated as a raw sugar.

One teaspoon of coconut sugar contains:

Put in mind that coconut sugar does retain some more vitamins and minerals than refined sugar.