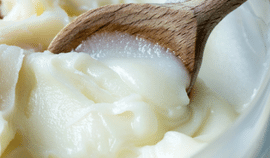 Through a process called rendering,Lard is separated from the fatty parts of a pig.

It can be obtained from any part of the pig that has a high concentration of fatty tissue.

Lard can be rendered by steaming, boiling, or dry heat.

Many cuisines use lard as a cooking fat or shortening, or as a spread in the same ways as butter. [1]

So, is lard vegan? The answer is Big NO.Lard is never vegan.Lard is pure animal product.

What do vegans use instead of lard?

The best substitute in general for lard would be a combination of vegetable shortening – which is generally hydrogenated palm oil – and butter.

Since this is a vegan substitute, you’ll have to just stick to the shortening.

Shortening was quite literally invented to replace lard – but you’ll lose a lot of the flakiness and full flavour if you don’t mix it with some butter.

For pastry crusts, you might also mix some coconut oil in with the shortening; the flaky texture essentially comes from saturated fats, for which coconut oil ranks pretty highly.

Can vegans use lard?

Vegans don’t use lard in any way.

Yes.Lard is considered meat as it is made from 100 percent animal fat (usually pork) that has been separated from the meat.

Lard is an animal product which makes it unsuitable for a vegetarian or vegan lifestyle.

Lard is dairy free. Lard does not contain milk and should be safe for those with a milk allergy.