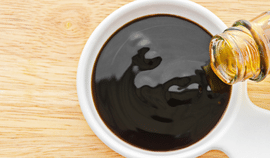 What is Oyster Sauce anyway? And what is oyster sauce made out of?

Oyster sauce was discovered by Lee Kum Sheung in Guangdong Province in 1888.It is commonly used in Chinese, Thai, Malay, Vietnamese, and Khmer cuisine.

Oysters were boiled for half an hour then removed for drying either by sun or over a moderate fire.

The water was reduced to “a blackish sauce”.

Today, Oyster sauces are usually made with a base of sugar and salt and thickened with corn starch.

Oyster extracts are then used to give flavor to the base sauce. Other ingredients, such as soy sauce and MSG, may also be added to deepen the flavor and add color.[1]

But despite the name, it doesn’t taste like fish at all.

So, Is Oyster Sauce Vegan? The answer is NO. Oyster Sauce is not vegan, as it’s made from a mixture of caramelized oyster juices( or Oyster extracts ) and Vegan don’t eat fish.

Is there a vegetarian version of oyster sauce?

Oyster sauce is probably the only Chinese stir-fry sauce that is consider a must-have for any Chinese and Asian food lovers.

The Vegetarian oyster sauce has no oysters in it. Instead, it is made with mushrooms, though it’s similar in color and texture to regular oyster sauce.

If you don’t have an Asian grocery store near you, you can find it online here.

Oyster is dairy free. Oyster does not contain milk and should be safe for those with a milk allergy.

Is oyster sauce made from oysters?

Yes.The regular oyster sauce is made from oysters.

But the mass-produced brands use oyster extract in combination with the bulk of sugar and cornstarch in place of the traditional and apparently cost-prohibitive process of caramelizing oyster broth.

What Is a Good Oyster Sauce Substitute?

Here’s some of the best substitutes for oyster sauce available.

Some of these are ready-made products, others are formed of a mixture of store cupboard staples to create a similar flavor profile.