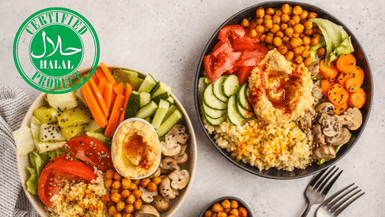 Vegan diets (or sometimes referred to as pure vegetarian diets) are diets made up of plant-based materials such as beans, fruits, grains, legumes, vegetables and/or combinations of them.

Vegan diets prohibit the use of any animal products i.e. materials derived from animals (including by-products and derivatives) such as dairy products (milk), eggs, meat (from cows, sheeps etc.), poultry (e.g. chickens & ducks) as well as seafood (like fishes & prawns) due to ethical considerations or moral convictions with regards to animal rights.

Halal foods are foods that can be consumed by Muslims according to Islamic law.

According to the Quran, all foods are considered halal with the exceptions of (which are haram):

a) Alcoholic drinks and other intoxicants.
b) Animals that are not slaughtered in the name of Allah or dead before slaughtering.
c) Blood.
d) Carnivores & birds of prey.
e) Pork and its by-products.
f) Foods contaminated with any of the above products.

Let’s talk a bit about alcohol.

Alcoholic beverages can be classified into 3 broad classes namely beers, spirits and wines.

In general, a beverage fermented from starch-heavy source (such as grains) whereby they are broken down into sugars (by malting for example) is called a beer; or if the mash is distilled, then it’s called a spirit.

Wine on the other hand is derived from fermented grapes.

Alcohol is haram in Islam because alcohol by nature is a psychoactive drug that has a depressant effect on those who drink it.

It slows down the function of the central nervous system as well as blocks some of the messages trying to get to the brain thus altering a person’s emotions, hearing, movement, perceptions and vision.

Although vegan diets appear to be halal in the sense that plant-based materials are used, vegans allow the use of alcohol in their diet.

As you can see, alcohols are obtained from plant-based materials and thus vegans are allowed to drink or use them in their diet.

Many vegan recipes use wine as ingredients to bring out the true flavour of the food.

As mentioned above, alcohol is strictly forbidden in Islam and as such not all vegan diets are indeed halal.

Due care be taken. Always check ingredients before consuming any food.