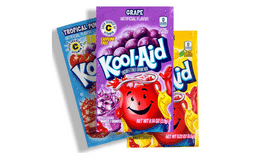 What is Kool Aid anyway?

Kool-Aid is an American brand of flavored drink mix.

It is a popular powdered drink mix invented by Edwin Perkins in Hastings, Nebraska in 1927.

It was a liquid concentrate called Fruit Smack and then changed to be only a powder that could be added to water when you were ready to enjoy it.

The drink is usually either served with ice or refrigerated and served chilled.

So, Is Kool Aid Vegan? The answer is : YES. Kool Aid are free of animal-derived ingredients, which mean it’s completely vegan.

Yes they can.Kool-Aid is vegan as it doesn’t contain any animal derived ingredients.

READ : Is Lard Vegan? Can Vegans Use Lard?

The main ingredients used to produce Kool-Aid Gels are:

So, Are Kool Aid Gels vegan?yes they are.

Does Kool-Aid have pork in it?

Kool-Aid does not contain any traces of pork in it.

People say that this drink mix contains gelatin, but it is not true.

Gelatin is non-vegan because it is a protein that is only found in the animal tissues.

Does Kool-Aid gels have gelatin?

Kool-Aid doesn’t contain any trace of gelatin or pork derived ingredient or alcoholic product and therefore the product is HALAL.