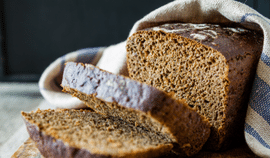 What is rye bread anyway? And how rye bread is made of?

Rye is a grain of a common weed that initially grew hidden in fields of wheat.

Rye bread is a type of bread made with various proportions of flour from rye grain.

The Rye is heavier and darker than most other flours.

Rye bread is often made with additions like molasses and cocoa powder, which add color and flavor and it tends to have a darker color and stronger.

Pure rye bread contains only rye flour, without any wheat.

A dark, dense, and close-textured loaf, is made from crushed or ground whole rye grains, usually without wheat flour, baked for long periods at a low temperature in a covered tin.[1]

Rye bread is a good source of dietary fiber, micronutrients, and bioactive compounds such as phenolic compounds, vitamins, and minerals.

So, Is Rye Bread Vegan? The answer is : Yes, it is! This bread made of the rye grain is considered vegan.

Rye Bread is vegan.This bread made of the rye grain is considered vegan.

But as you can imagine there are many types and recipes for rye bread, but in the vast majority of recipes, there is no use of animal derived ingredients.

Straight rye bread gets made using a sourdough starter and rye meal.

Dark Rye bread gets made using whole grains of rye.

READ : Is Lard Vegan? Can Vegans Use Lard?

What kind of breads are vegan?

All kinds of breads are vegan unless they call for milk, butter,egg and any other animal derived ingredients.

Pure bread are vegan, but today’s recipe contain milk, egg and other animal ingredients to make more variations and flavors.

Does rye bread have milk in it?

The original recipe of Rye Bread does not contain milk in it.

But as there’s more than one type and recipes of rye bread, some may contain milk in it.

Unfortunately, rye bread contains gluten and is not safe for a gluten-free diet.

Rye is a type of grain that innately has gluten, and therefore can’t be made gluten-free.

2-Make the dough: Add the caraway seeds, salt, vegetable oil, cocoa powder, 2 cups of rye flour and then 2 cups of bread flour, mixing into the yeast mixture after each addition with a wooden spoon.

Add more bread flour, a cup at a time, until the dough is not so sticky and it is too hard to mix it with the wooden spoon. At that point, spread a half cupful of flour onto a large, clean, flat surface and put the dough onto the surface.

4-Let the dough rise: Spread some vegetable oil around a large bowl and place the dough in it, turning it so it gets coated in the oil.

Cover the bowl with plastic wrap or a damp cloth. Let rise at room temperature until it has doubled in size, 1 to 1 1/2 hours.

5-Divide the dough: Gently press down on the risen dough so some of its air is released. Turn the dough out onto a lightly floured surface, knead the dough a few turns and then divide it by cutting it in half with a sharp knife.

6-Shape the loaves: Shape each half into loaf. Place dough loafs into either oiled 8×4-inch bread loaf pans, or onto a flat baking sheet or peel that has been sprinkled with corn meal, depending if you want to cook the loaves in pans or directly on a baking stone. Cover with plastic or a damp cloth.

7-Let the loaves rise: Let the bread rise again, this time not doubling in volume, but rising by about half of its volume, about 30 to 45 minutes, half as long as the first rising. The dough should be peeking over the top of the loaf pan if using a loaf pan.

8-Heat the oven: If you are using a baking stone, place the stone in the oven. Preheat oven to 350°F for at least half an hour before baking.

9-Bake the loaves: If baking on a stone and not in the pan, score the loaves a few times on the top of the dough right before putting it in the oven.Put loaves in the oven. If you have a mister, mist the dough with a little water the first 10 minutes of baking. Bake for 40-50 minutes, or until done. The bread should sound hollow when tapped.

Rye bread will keep for several days at room temperature if kept in a paper bag.