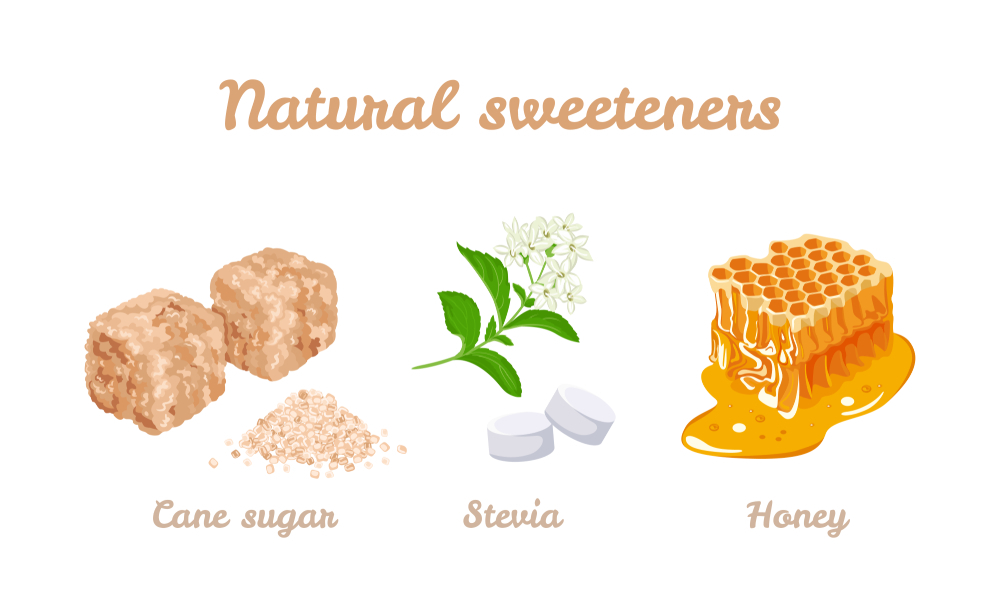 The Honey is often a questionable topic in the vegan communities as many people want to know whether or not honey is actually suitable for vegans or not.

Stevia is a plant grown in Brazil and Paraguay, usually about 200 times sweeter than sugar.

The sweetness of the stevia leaves is mainly caused by two compounds – rebaudioside A. and stevioside, which can have minimal or zero calories per serving.

This plant has many medicinal properties that lend to its incredible disease-fighting effects.

However, people confuse stevia with Truvia but this sweetener only contains less than 1% stevia.

READ : Stevia Side Effects And Warnings

Muscovado sugar is an unrefined cane sugar in which the molasses is not removed and its production procedure is similar with coconut sugar.

It got its name from the Spanish word ”mascabado” that literally translates as ”unrefined.”

It can be found in different strengths: the darker it is, the higher its molasses content.

This sugar is nutritionally richer than white refined sugar or brown sugar because it retains the majority of the natural nutrients in sugarcane juice, such as – calcium, phosphorus, potassium, magnesium and iron, plus vitamins and other phytonutrients.

It is one of the best vegan honey substitutes.

Yacon syrup is a dark brown syrup that is extracted from the roots of the Yacon plant (botanical name – Smallanthus sonchifolius).

The yacon grows natively in the Andes mountains in South America and has been used as a food for hundreds of years by the Andean peoples for medicinal purposes.

Also,yacon syrup is a natural sweetener that can help you lose weight because it is a good source of fructooligosaccharide, a group of compounds which feed the good bacteria in your gut and create more probiotics.

In addition, it has half the calories of the white refined sugar and a low score on the glycemic index.

It can be consumed as a sweetener in tea, coffee, or smoothies.

READ: How to Go Vegan on a Budget

Because of its “malty” flavor, it is similar to molasses.

It is a reasonably good source of some vitamins and minerals but has no dietary fiber.

Furthermore, this vegan honey substitute has half the sweetness of refined sugar, therefore, is considered a healthier alternative to refined sugar.

It has the look and consistency of honey or agave nectar but it’s not as thick.

Brown rice syrup is fructose free and has a lower glycemic index than refined sugar.

Furthermore, it is usually used as a substitute for high-fructose corn syrup in products such as snack bars and breakfast cereals.

READ : What are the Most Common Sugar Substitutes?

Maple syrup has been used, as a vegan honey substitute, by Native Americans for hundreds of years and is made from maple tree’s leaves.

Over 80 percent of the world’s supply is currently produced in Canada.

It has a glycemic index of 54, plus it contains some trace minerals (potassium, zinc, calcium, magnesium, iron, and manganese), vitamins (B1, B2, B3 and B6) and polyphenols (which inhibit the enzymes that convert carbohydrates into sugars).

Due to its antioxidant content, it is thought to reduce  inflammations which can prove quite helpful in preventing certain diseases like inflammatory bowel disease, arthritis, or heart disease.

Maple syrup is used especially on pancakes where it is used as a topping but also on waffles and French toast.

This maple syrup is my dad’s favorite vegan honey substitute.

Agave nectar, a natural sweetener, is produced from the leaves of the blue agave plant which was cultivated for centuries by the Native American population.

It has a low glycemic index of 27 and is about 1,5 times sweeter than regular refined sugar.

It is believed to help increase energy levels and to boost the immune system.

You can use it to improve the taste of your coffee and tea, as well as your food.

Molasses is the by-product of the sugarcane refining process (refining means just boiling and not any other chemical process).

There are three forms of molasses: light, dark, and blackstrap molasses (the most healthy form).

It has a glycemic index of 55 and is a good source of minerals (copper, chromium, manganese, phosphorous, selenium, iron, cobalt, potassium, sodium, magnesium, calcium), vitamins (B1, B2, B3, B5, B6), dietary fiber, and no protein, fat or cholesterol.

Due to its high content of iron, it is considered a good remedy for women during their normal menstrual cycle each month.

Coconut nectar is produced from the sap of the coconut tree blossom.

It has a glycemic index of 35 (great for diabetics), 17 amino acids (the building blocks of protein), minerals (magnesium, iron, potassium, zinc), vitamins (B1, B2, B3, and B6), and small amounts of fiber.

Additionally, it contains inulin (a starchy substance) and fructooligosaccharides that help to feed the healthy bacteria in our intestines.

It can be used as a natural sweetener in coffee, tea, pancakes, toast, smoothies, or in raw food desserts.

Date paste may be the best vegan honey substitute you’re not using.

Dates are rich in dietary fiber, and contain vitamins (A, B1, B2, B3, B5, B6, folate, C, E, K) and minerals (selenium, calcium, iron, sulfur, potassium, manganese, phosphorous, copper, zinc, and magnesium), protein, therefore they add a lot of nutrition, not just flavor.

Furthermore, dates are good for gaining weight and have been used as an aphrodisiac since ages.

READ : Is manuka honey worth it